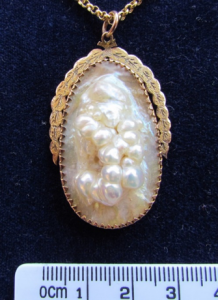 Abstract: This article was prompted by a desire to understand the background of several examples of pearl shell jewellery that originated in Shark Bay, Western Australia. Following an overview of the geomorphology of Shark Bay, the European discovery of pearl shell and the subsequent development of Australia’s first pearl industry at Shark Bay is described. The Adams family’s links to pearling at Shark Bay are referenced to give provenance to the pearl shell and jewellery. The article concludes with descriptions of pearl shell, seed pearls and pearl blister pendants acquired by family members from Shark Bay from this historically significant source.

My Grandmother’s Pendant
Our family does not have many heirlooms, but I have my grandmother’s pearl blister pendant (Figure 1) and my sister Frances has a similar pearl blister pendant, which belonged to our mother (Figure 2). All I knew about Grandma’s pendant was that the pearl came from Shark Bay via Mum’s brother, Frank Adams. Our grandmother also gave a pearl blister pendant to Frank’s wife Freda when they married in 1942. This pendant passed to Frank’s daughter Jennifer, but sadly it was stolen during a burglary. Before World War II, we had many relatives (on our mother’s side) in Shark Bay, most of whom were involved in pearling, so we assumed that the three pendants had a similar origin. I began to wonder about the provenance of these pearl pendants and found I needed to learn much more about pearls from Shark Bay. This article documents the story of Shark Bay pearl shell. It begins by tracing the European history of the discovery of pearl shell at Shark Bay and the development of its pearl industry, Australia’s first. The Adams family’s links to pearling at Shark Bay are referenced to give provenance for the several examples of pearls and pearl shell described from this historically significant source.

Read the full article in the December 2020 Issue of the Australian Gemmologist. Members of the Gemmological Associate receive copies of the journal free of charge – find out more about becoming a member today. Need a copy of the issue? Please contact the Editor. 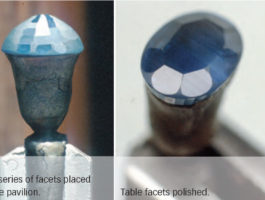 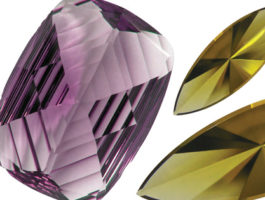 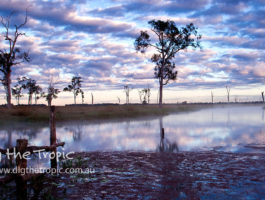 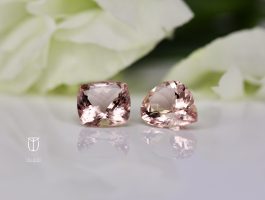